The process cycle for die casting consists of five main stages, which are explained below. The total cycle time is very short, typically between 2 seconds and 1 minute.

The first step is the preparation and clamping of the two halves of the die. Each die half is first cleaned from the previous injection and then lubricated to facilitate the ejection of the next part. The lubrication time increases with part size, as well as the number of cavities and side-cores. Also, lubrication may not be required after each cycle, but after 2 or 3 cycles, depending upon the material. After lubrication, the two die halves, which are attached inside the die casting machine, are closed and securely clamped together. Sufficient force must be applied to the die to keep it securely closed while the metal is injected. The time required to close and clamp the die is dependent upon the machine - larger machines (those with greater clamping forces) will require more time. This time can be estimated from the dry cycle time of the machine.

The molten metal, which is maintained at a set temperature in the furnace, is next transferred into a chamber where it can be injected into the die. The method of transferring the molten metal is dependent upon the type of die casting machine, whether a hot chamber or cold chamber machine is being used. The difference in this equipment will be detailed in the next section. Once transferred, the molten metal is injected at high pressures into the die. Typical injection pressure ranges from 1,000 to 20,000 psi. This pressure holds the molten metal in the dies during solidification. The amount of metal that is injected into the die is referred to as the shot. The injection time is the time required for the molten metal to fill all of the channels and cavities in the die. This time is very short, typically less than 0.1 seconds, in order to prevent early solidification of any one part of the metal. The proper injection time can be determined by the thermodynamic properties of the material, as well as the wall thickness of the casting. A greater wall thickness will require a longer injection time. In the case where a cold chamber die casting machine is being used, the injection time must also include the time to manually ladle the molten metal into the shot chamber.

The molten metal that is injected into the die will begin to cool and solidify once it enters the die cavity. When the entire cavity is filled and the molten metal solidifies, the final shape of the casting is formed. The die can not be opened until the cooling time has elapsed and the casting is solidified. The cooling time can be estimated from several thermodynamic properties of the metal, the maximum wall thickness of the casting, and the complexity of the die. A greater wall thickness will require a longer cooling time. The geometric complexity of the die also requires a longer cooling time because the additional resistance to the flow of heat.

After the predetermined cooling time has passed, the die halves can be opened and an ejection mechanism can push the casting out of the die cavity. The time to open the die can be estimated from the dry cycle time of the machine and the ejection time is determined by the size of the casting's envelope and should include time for the casting to fall free of the die. The ejection mechanism must apply some force to eject the part because during cooling the part shrinks and adheres to the die. Once the casting is ejected, the die can be clamped shut for the next injection.

During cooling, the material in the channels of the die will solidify attached to the casting. This excess material, along with any flash that has occurred, must be trimmed from the casting either manually via cutting or sawing, or using a trimming press. The time required to trim the excess material can be estimated from the size of the casting's envelope. The scrap material that results from this trimming is either discarded or can be reused in the die casting process. Recycled material may need to be reconditioned to the proper chemical composition before it can be combined with non-recycled metal and reused in the die casting process. 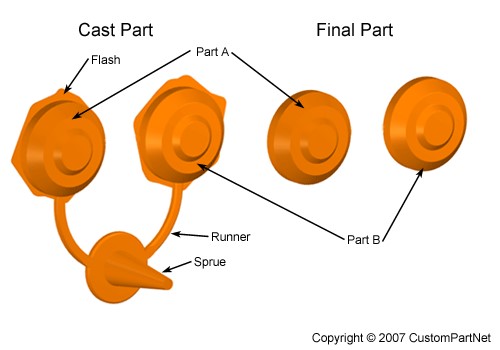 We look forward to the opportunity to be of service to you by providing the continual dedication to excellence.
As an ISO 9001:2015 registered company, we consider your quality and service needs as our primary goal.
Address
No.181 Qinghe Road, Chunxiao Industrial District, Ningbo, China
Email
info@ryan-china.com
Phone
0086-574-87732891